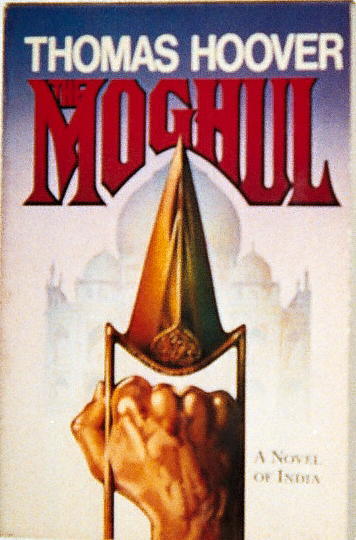 Based on real people (ca. 1620) – THE MOGHUL begins in a rip-roaring sea battle north of Bombay in which the vastly out-gunned adventurer, Brian Hawksworth, ship's captain and emissary of King James, blows away a flotilla of Portuguese galleons to gain access to an Indian port. He's come to open trade for "barbaric" England and squeeze out the Portuguese, who try to kill him at every turn. But once on land, he's captive: the beauty and romance of the exquisite Moghul Empire seduce him from his material goals to a new quest – of supreme sensuality in music, visions, and sacred lovemaking.

India, ruled by the son of great Akbar, is about to pass to one of his sons. Hawksworth must choose sides, but will he choose right? The future of England, and of India, depend on it. Assailed by intrigue and assassination, tormented by a forbidden love, enthralled by a mystic poet, Hawksworth engages war elephants, tiger hunts, the harem of the Red Fort of Agra, the Rajput warriors at Udaipur, becomes intimate champion to Shah Jahan, (builder of the Taj Mahal), and, in his supreme test, plays the sitar with a touch that elicits from the great Shah – "Finally, my English friend – you understand."

"THE MOGHUL captivates the reader in a similar fashion to M. M. Kaye's highly successful novel THE FAR PAVILIONS."